Fifteen years before Parkhill and the Tittle Luther Partnership (TLP) merged under the Parkhill umbrella, TLP completed the Teague Special Events Center on Abilene Christian University’s campus to house special events, indoor tennis, and ACU Athletic offices and locker rooms. In 2016, Parkhill was chosen again to breathe new life into Teague through a 4,200-square-foot renovation and addition that aimed to meet the practical concern of consolidating the separate entrances to the Special Events Center and the Athletic Offices into a single point of entry, as well as the aspirational goal of creating a space to tell stories of those from the ACU family that have impacted the University and the world.

ACU has had a great partnership with Parkhill and before that with Tittle Luther Partnership, which did a tremendous amount of work on the ACU campus, said Corey Ruff, Associate VP of operations.

“Our contact, Brandon Young, is a tenured, associate professor of architecture and design here at ACU, so he is obviously a great liaison between ACU and Parkhill,” Corey said. “The architects at Parkhill are always available if we ask a question or if we want to ask about industry standards or cost estimating. We have a good relationship.”

Brandon is an Associate and a Studio Leader for Parkhill’s Higher Education Sector. 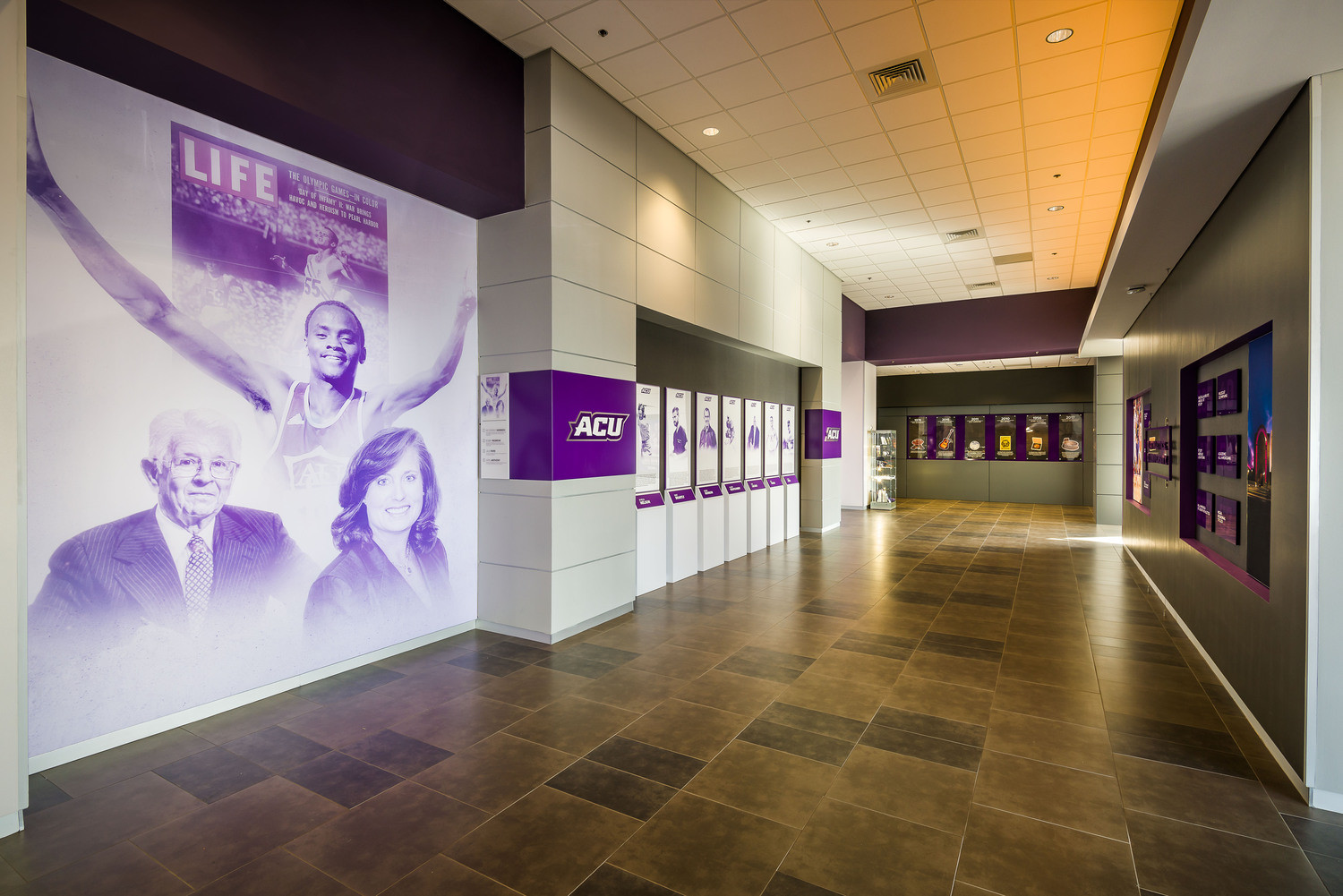 The gallery space also allows ACU to continuously tell stories of not only ACU athletics but pioneers of the university and the great things that have been accomplished over the decades. One of the first murals was of Bobby Morrow on the cover of Life magazine in 1956. The former track and field student-athlete won three gold medals at the 1956 Olympics in Melbourne, Australia. Bobby won the 100 meters, 200 meters and was the anchor on the United States’ 4×100 meter relay team. He was widely acclaimed as the greatest sprinter who ever lived and was also the Sports Illustrated Sportsman of the Year in 1956.

“It was something we’re super proud of. To me, it’s a great space for the initial impression that a student-athlete or guest is going to have when they come on the campus,” Corey added.

The displays change through the years. Working within the existing building footprint and structural system, the addition occupies what was formerly the porte-cochere, transforming a utilitarian outdoor space into a vibrant reception space for the entire building. The exterior of the building is clad in silver aluminum panels and a generous amount of clear glass that expands the interior space to the outside while creating a visually appealing counterpart to Wildcat Stadium to the north. An aluminum-clad cantilevered canopy provides cover at the drop-off while the geometry of the glass storefront gently guides visitors to the entrances, which are symmetrical to the reception space.

“Just looking at the space, the attention to details, the materials that were selected, you can tell that there was a lot of thought and discussion that went into what the final product was going to be, so they did a great job,” Corey said.

He added that ACU appreciates the importance of the welcome center for them, their parents and guests on campus while competing with much larger universities when it comes to recruiting.

Renovations and additions are typically complex projects because of the unknowns, said Brandon. This project was no exception – specifically working with and around discovered structural and mechanical components.

The Teague Special Events Center quickly became a common point of interest on ACU’s campus, especially on football game days, as thousands of ACU Wildcat fans pass by, and through Teague, on their way to Wildcat Stadium. 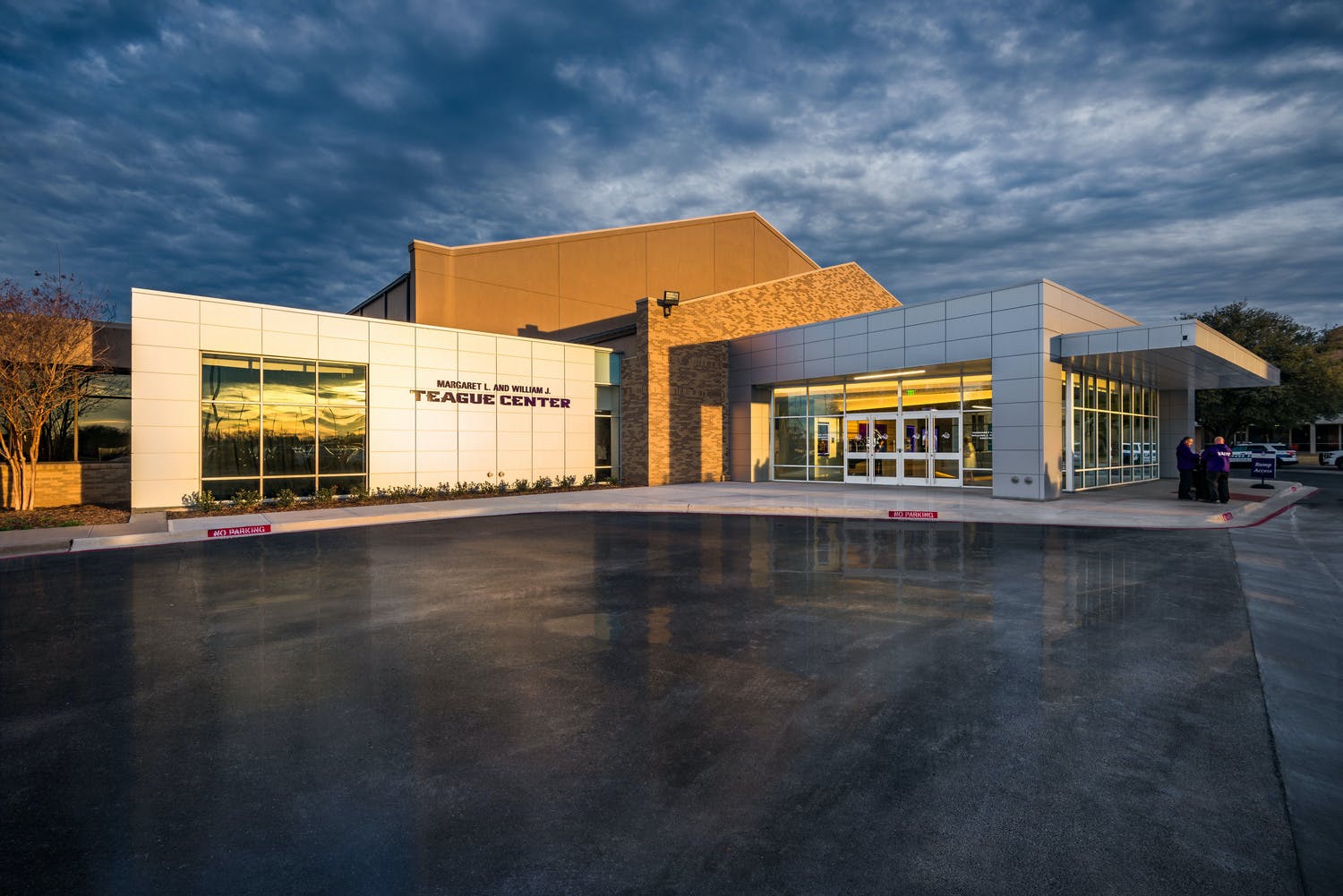