Amarillo College hosted a grand opening for a new student commons lab, named “The Underground,” on November 5. The design transformed the basement of Ware Student Commons into an 11,000-SF technology hub for gathering and studying 24/7. Features include PC and Mac desktop and laptop computers, 100 work stations, production rooms, both large and small collaboration rooms, 85-inch screens, high-quality printers, and many more state-of-the-art amenities.

“’Wow,’ that was the biggest impression that I could think of,” said Brylee Gray, Amarillo College Student Government Association historian and child psychology major. “It’s insane the amount of computers and the amount of technology that they have.”

Brylee said she has been to Odessa College, Midland College, and similar junior colleges, but The Underground is unique from the facilities those schools offer.

“It feels so much more personal like they did this for the students not for the school,” she said. 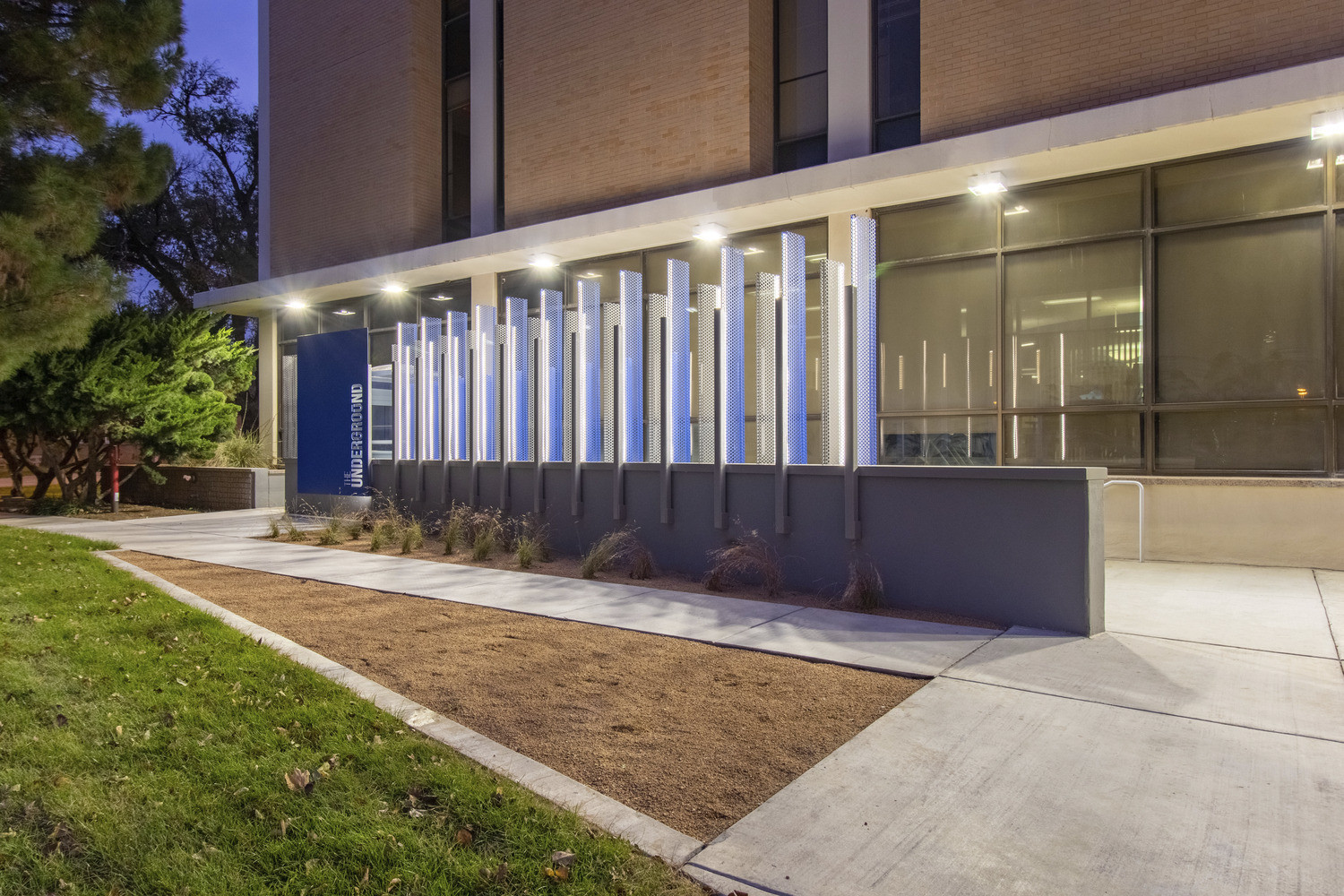 Three concepts pervade the design – safety, visibility and access. The south entry stairway was rebuilt to attract students at all hours to use the lab. The illuminated fin design is a visible icon and supports the laser cut brand name “The Underground.” The identity of each area is marked by color and ceiling material in the open space rather than closing off spaces with opaque walls. The angled study rooms with glazed walls allow visibility throughout the space.

“I like the transparency of it and the implied safety,” said Kim Hooker, AIA, project manager. “You can really be in any part of the space and see through rooms and see who’s coming and going but still have places to do your work.”

This technology hub is not only furnished with the latest technology. Alyssa Vance, IIDA, interior designer, said the interiors were designed so students would want to come there to study. Sleek furniture, geometric patterns, and use of Amarillo College colors set the tone for an enjoyable and comfortable learning environment. 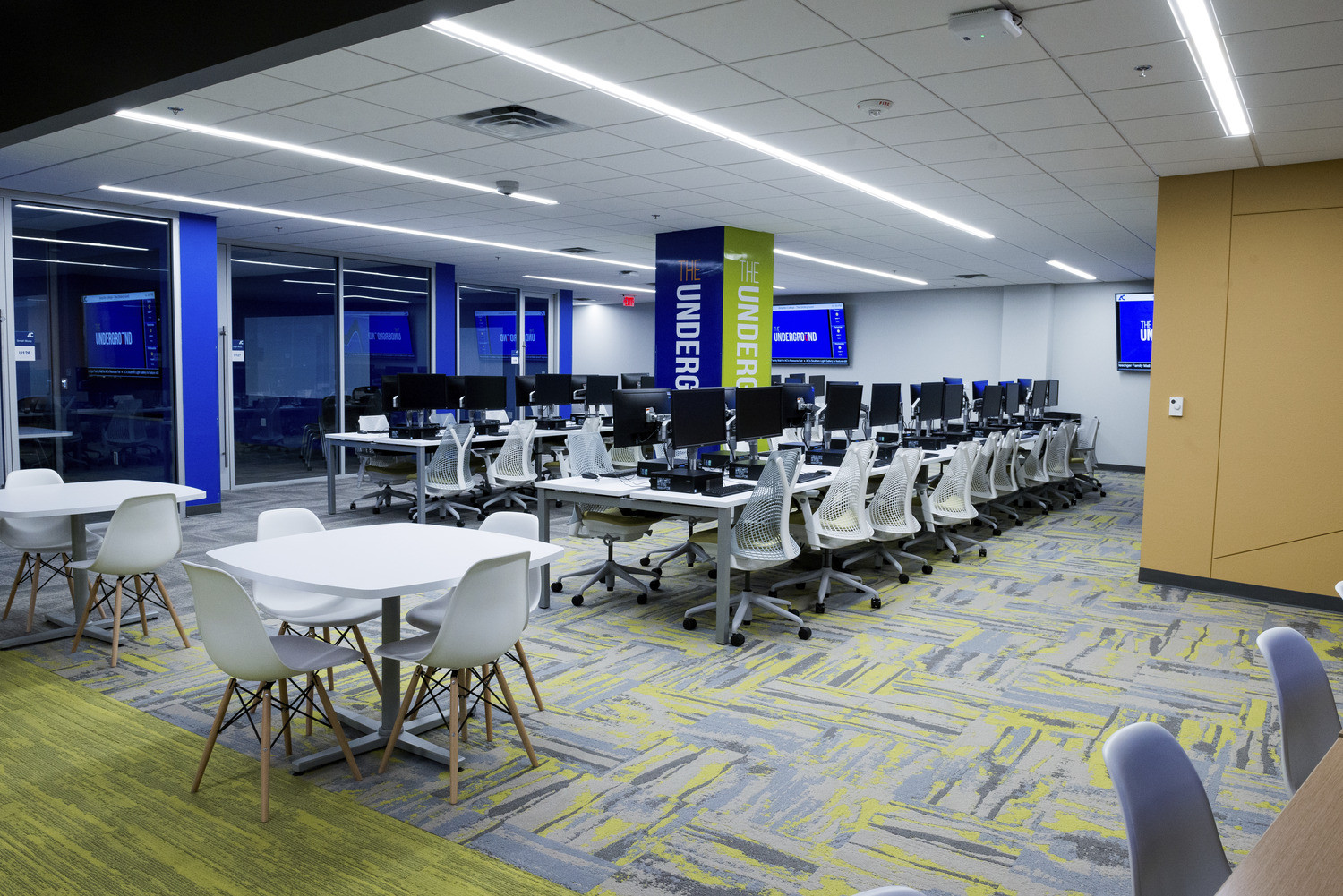 “You can tell all around me that it’s fun, bright, energetic colors, fun patterns, and interesting movement,” Alyssa said. “We played with linear lines in the lights, and in the floor pattern, there’s a herringbone that’s integrated from the front of the space all the way to the back, so it moves with you.

“It’s just very energetic and positive and a place where students want to be. That’s what we want – our students to come here and stay here for long periods of time. Even late at night when they’re studying, the colors around them and the furniture and the finishes should really elevate their studies.”

Lori Petty, instructional designer at Amarillo College, uses the facility for faculty training and appreciates the resources available for that type of training including the white-board walls, moveable furniture and rooms that can opened up or closed off for collaborative or separate use.

“As an activity-based instructor,” Lori said, “there’s a lot of different things I can teach my faculty how to do with all of that different configuration.”

Common themes that students and faculty said they enjoyed are the modernity and openness of the new space. They also appreciate the availability of resources because of the 24/7 hours of being open and flexibility of the collaborative and private areas.

“Having a kind of collective industry of people,” Kim said. “I think that’s why people do like to study together rather than just hide out. This is a really fun community space and learning space.” 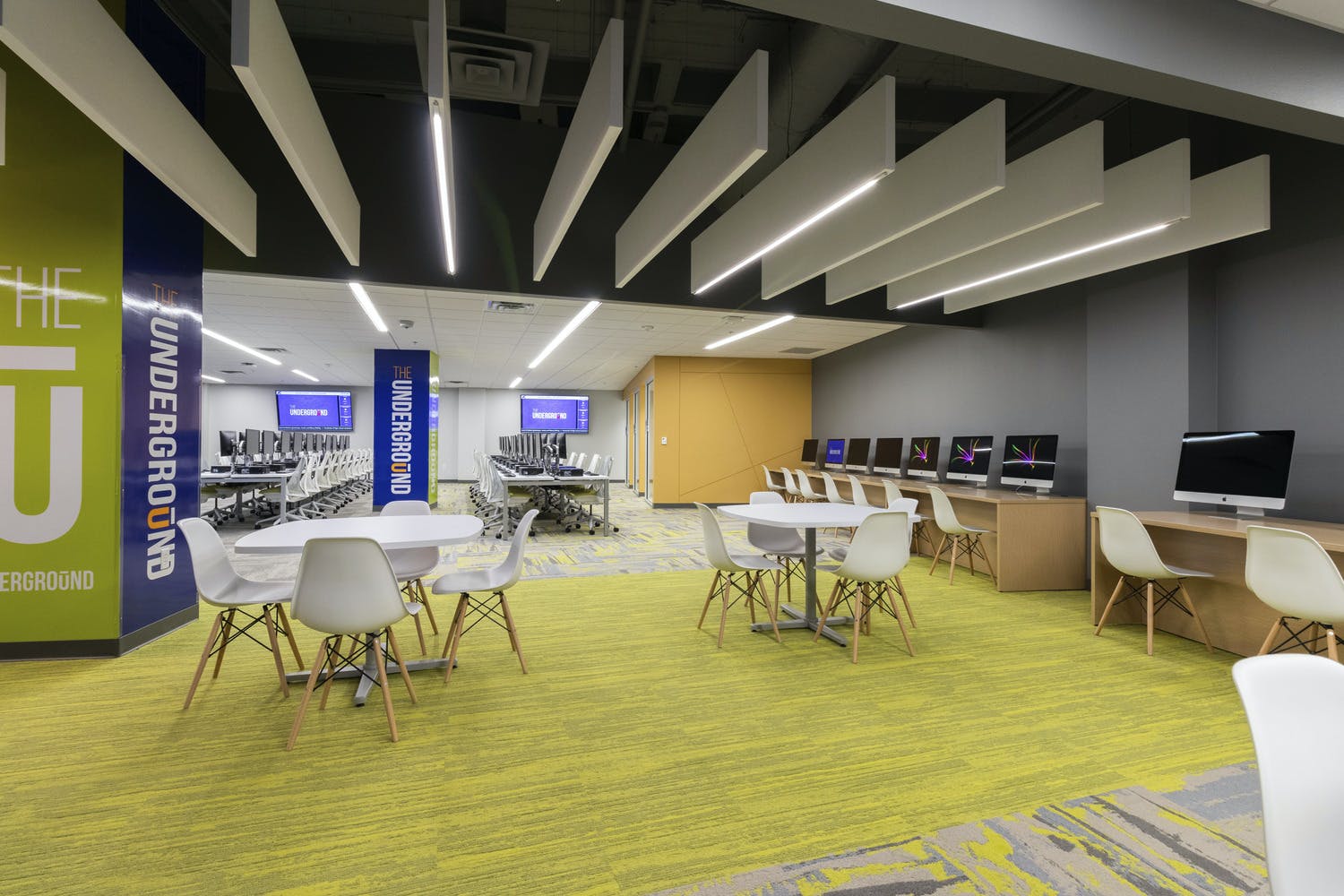