Finite Element Analysis Then and Now 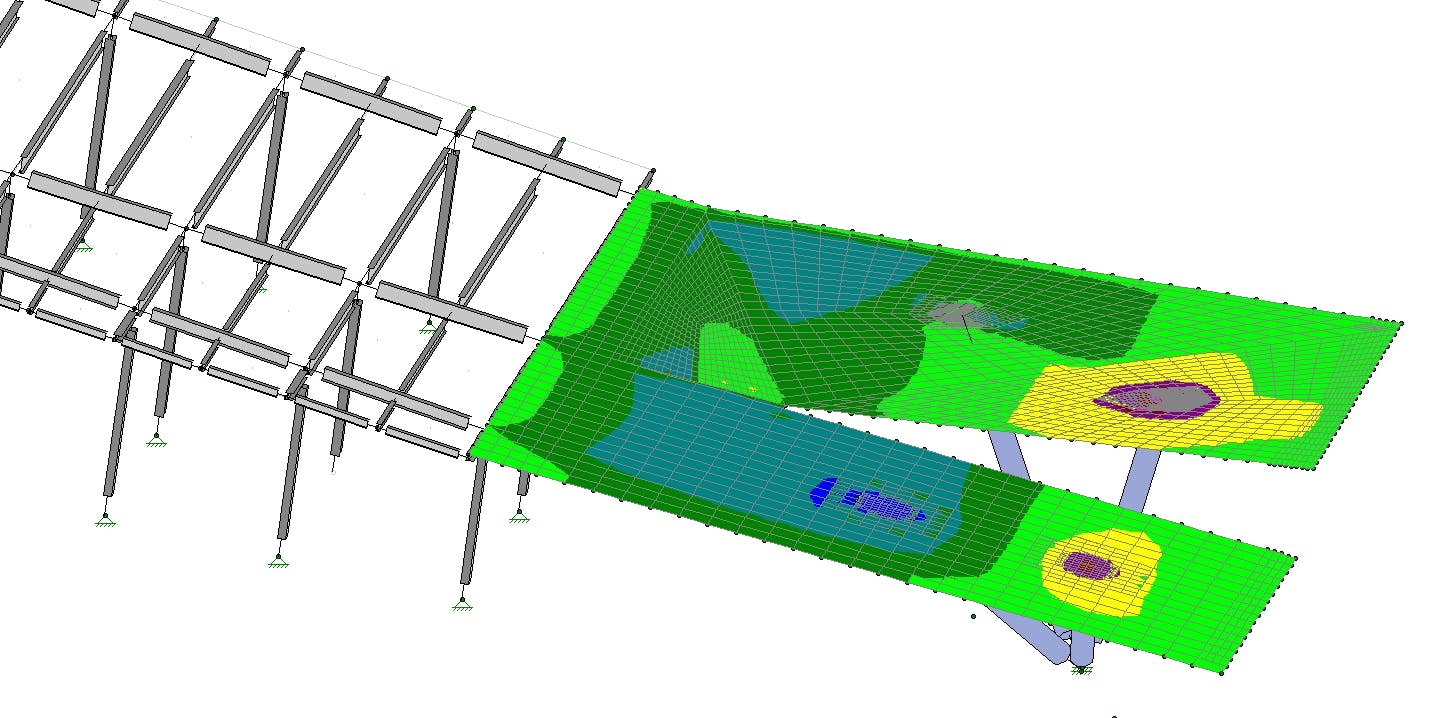 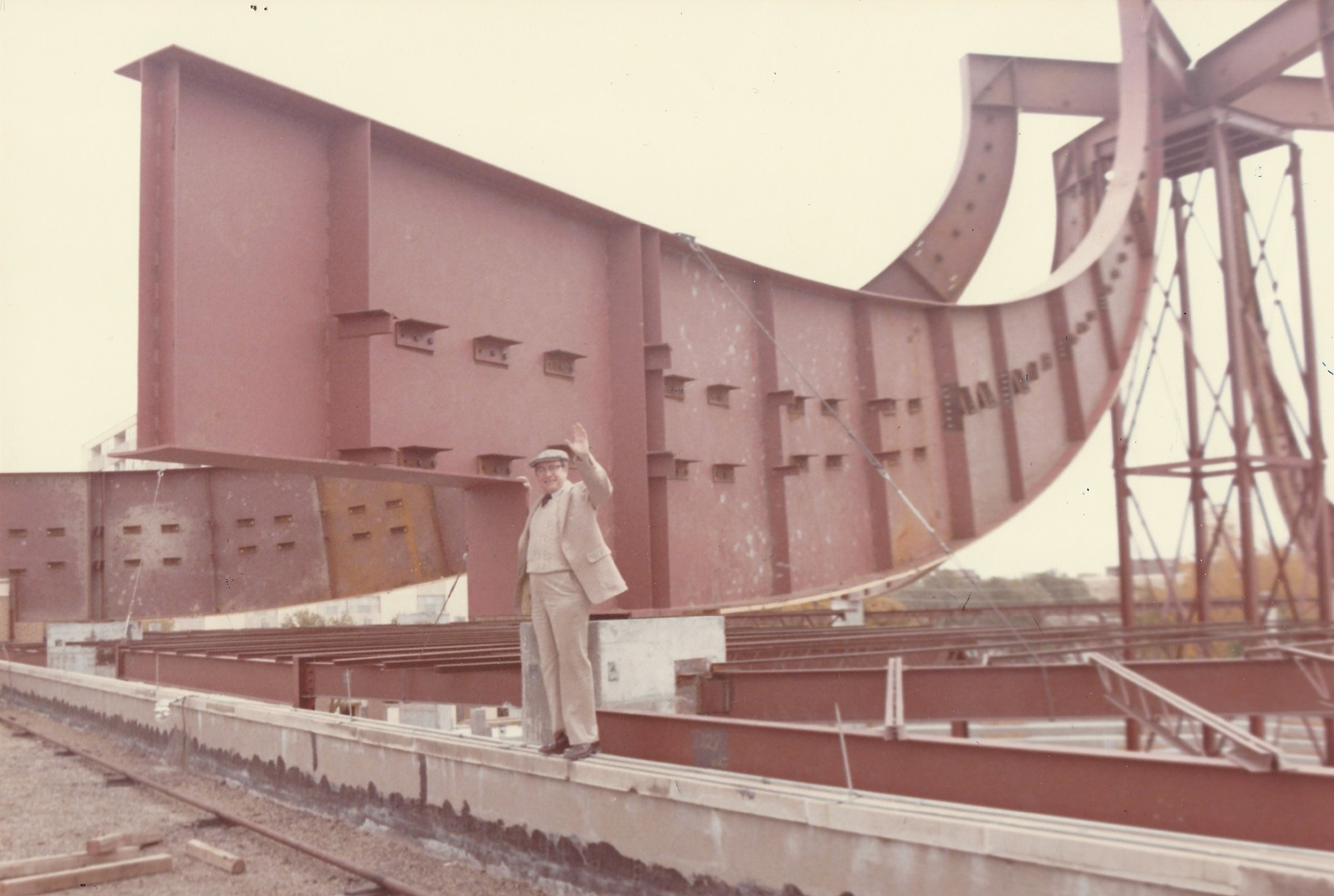 In 1975 Bill Cartwright (pictured to the right) of Atcheson, Cartwright, & Associates, an architecture firm that would later merge with Parkhill, visited the site of Amarillo Central Church of Christ in Amarillo, Texas. The project was designed by his son Mike Cartwright and was the firm’s first project using finite element analysis. In 2016 the same method was used for “The Bird Tail” at Buddy Holly Hall of Performance Arts and Sciences in Lubbock, Texas. The feature was designed by Parkhill’s Structural Team.

Finite element analysis is based on the finite element method. The method is used to predict outcomes of scenarios relating to stress and strain of a design. Civil engineering and structural design are recognized for using this method to safely build bridges, construct high-rise offices, and to achieve unique structural features of buildings.

The origin of finite element analysis can be traced back to the 1940s and Alexander Hrennikoff, a structural engineer at the University of British Columbia. He published a paper in the American Society of Mechanical Engineers Journal of Applied Mechanics on his membrane and plate model as a lattice framework. The membranes and plates behaved differently in stress and strain of structural situations. This research is deemed as a turning point in engineering and noted as the birth of the finite element method.

Finite element analysis was used to design the girders that would give the roof of Amarillo Central its distinguishable shape. Mike Cartwright said the project took him eight months to design. This project was also the first he signed as a licensed engineer following his graduation from Texas Tech University in 1976 and obtaining his engineering license in 1980. 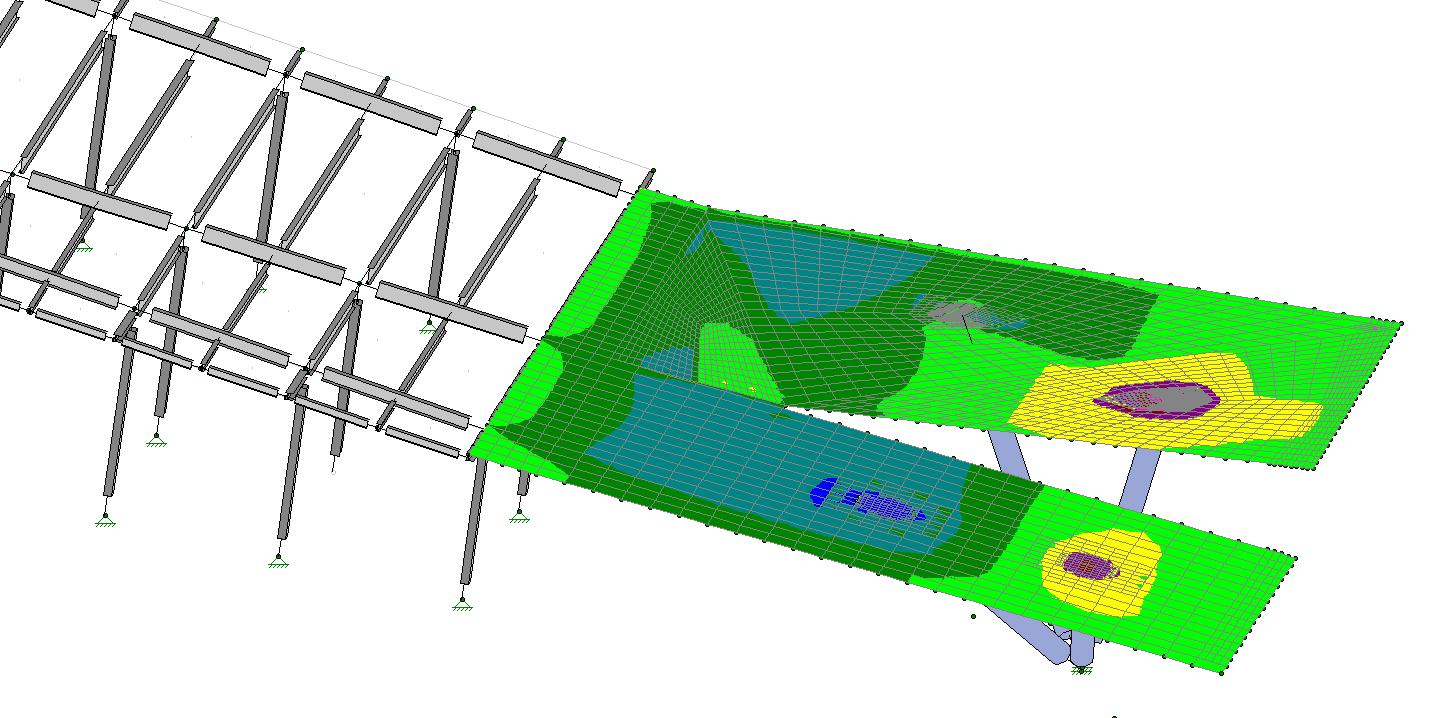 “The Bird Tail” located on the east side of Buddy Holly Hall is another notable engineering feat designed through finite element analysis. The structural design complements the architectural expertise of the many design professionals involved in this project.

Parkhill Structural Engineer Matt Laverty, PE, said, “The biggest challenge was designing the shape of concrete while limiting the vertical and horizontal movement from the weight of the concrete. The splayed columns, located towards the middle, have varied slope directions and cantilevered edges that compounded this movement. While the mass of the concrete added to the problem, the stiffness of concrete helped us with the problems in movement.”

In all, the columns, the deck, and foundations of the structure included over 500 cubic yards of concrete, weighing over 2 million pounds. The deck was broken up into over 3000 individual finite elements (pictured above) in the design model that showed different levels of stress and how the stress was distributed.

“Structures like ‘The Bird Tail’ don’t behave like a standard beam or slab,” Roland said, “so we can’t use standard design approaches. 3D design software today allows us to build a finite element model, perform thousands of calculations in a few seconds, and then design a solution that fits the structure’s response.”

There have been many advancements in finite element analysis relating to its application and use in technology since the birth of the idea in the 1940s. From research findings of Alexander Hrennikoff’s simple lattice framework to the complex balance of stress and strain in the design of Buddy Holly Hall, the method continues to be applied in many different ways to achieve an endless number of engineering designs.

"Computer modeling, analysis, and visualization have changed the way we design structures," Matt said. "I believe we’ve just barely scratched the surface of the use of technology as it relates to building and structure design. These new tools have allowed us to push the limits in our designs of structures." 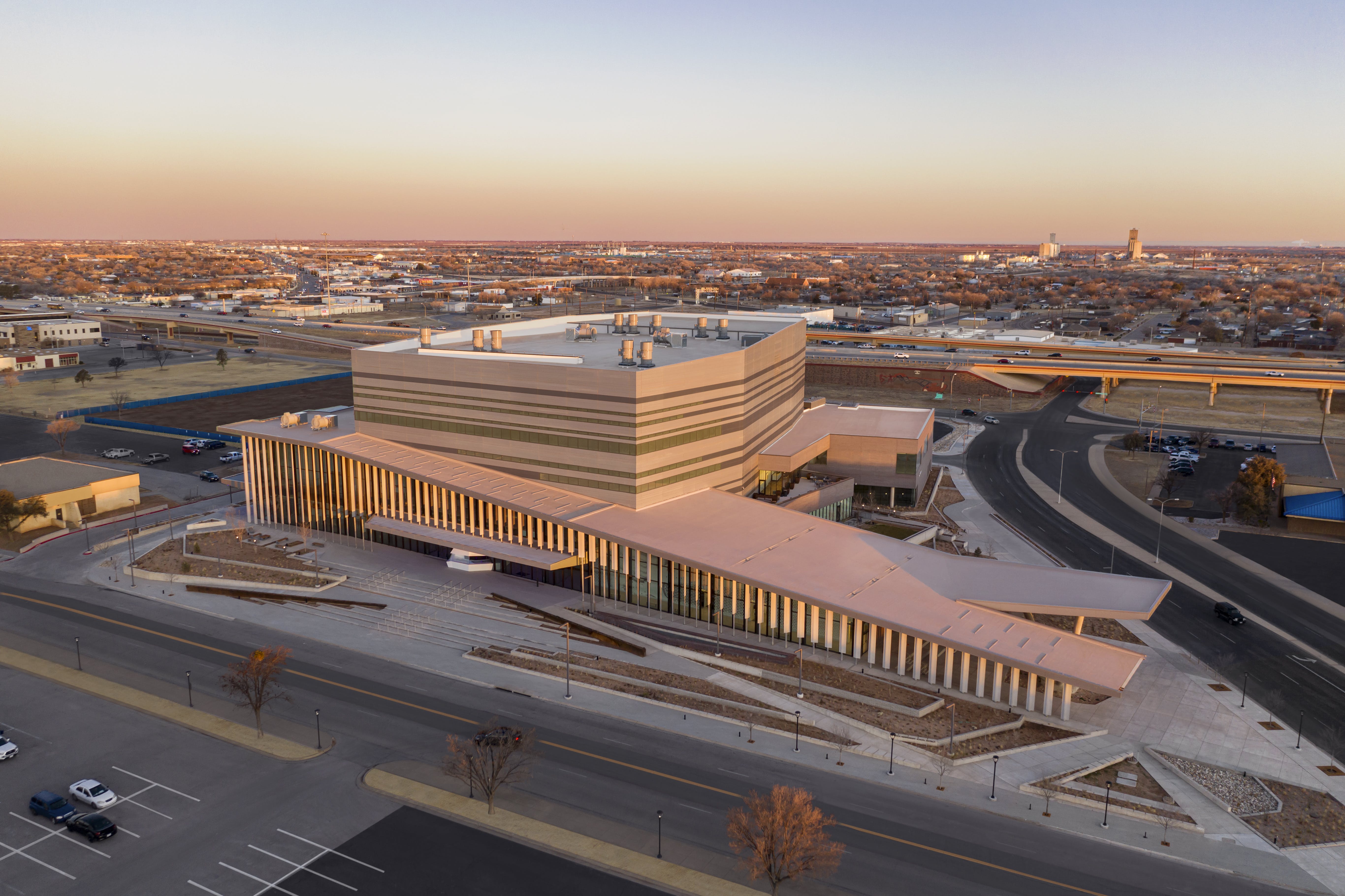 The Bird Tail at Buddy Holly Hall of Performing Arts and Sciences is on the east side of the facility located in Lubbock, Texas. 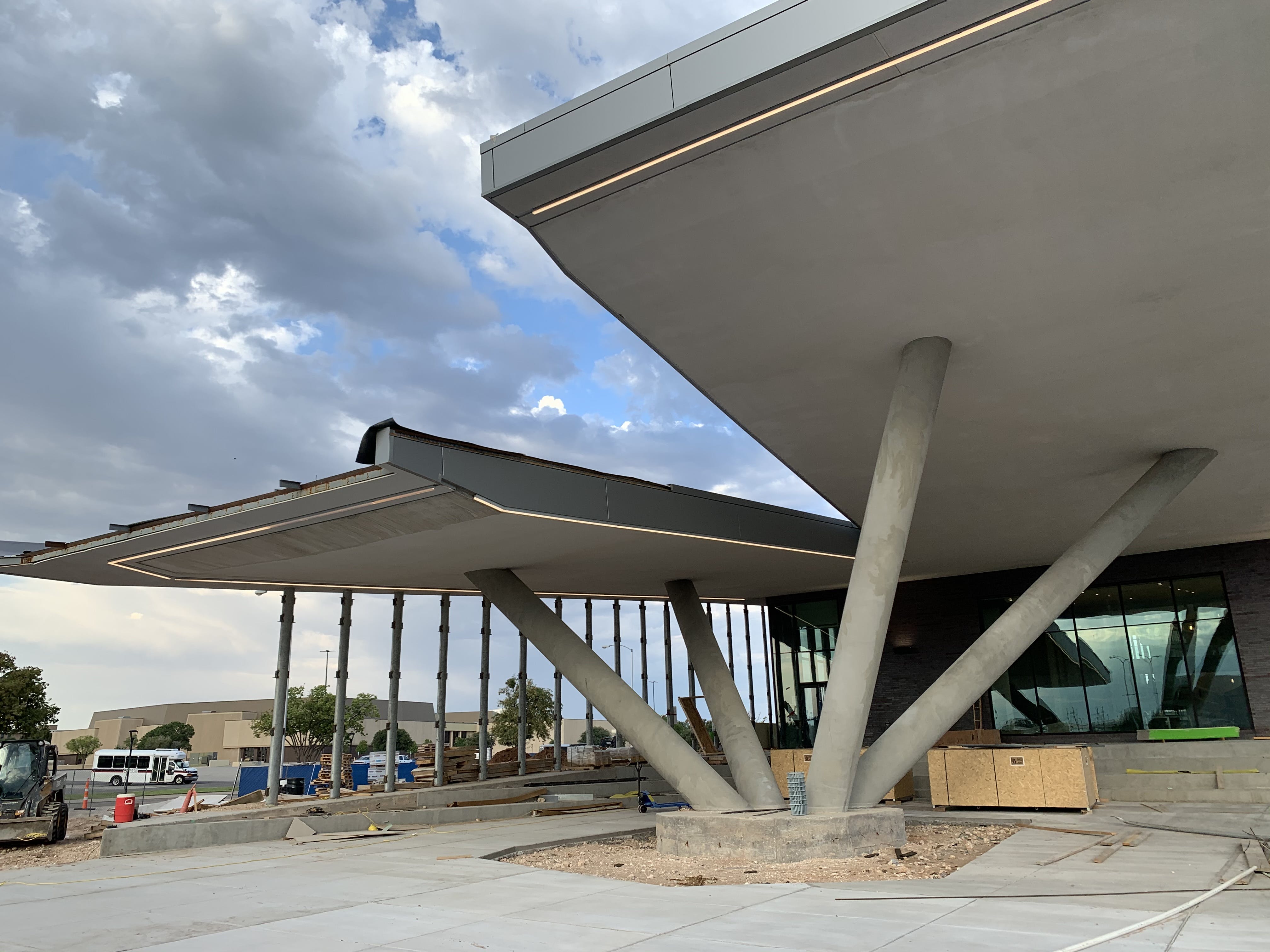 The columns, the deck, and foundations of the structure included over 500 cubic yards of concrete, weighing over 2 million pounds. 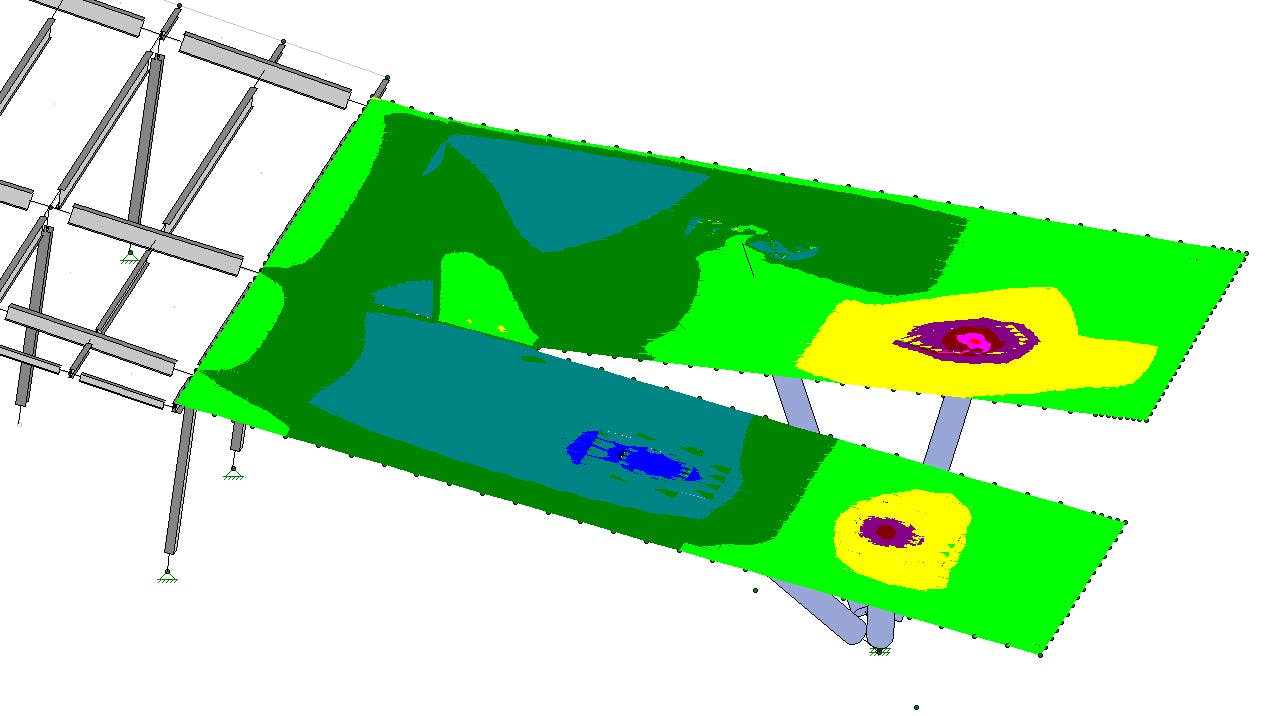 The deck was broken up into over 3000 individual finite elements in the model. Areas of pink/red/maroon are the highest areas of stress.