Post-occupancy evaluations are a tool that architects use to measure how well their design meets expectations. The main purpose of the evaluation is to get feedback from a building’s users after they’ve been inside it long enough to have a good idea of what works well and what does not.

A small team, led by the architects who designed the school, conducted in-person surveys with more than 2,000 students at the three schools. Students were gathered into groups and given voting signs with a smiley face on one side and a frowning face on the other. Then, the groups were asked a series of questions about their school. The schools’ architects themselves were the emcees, introducing the students to the field of architecture and explaining how a building is brought to life from an architect’s imagination to become a real, physical structure.

“That part was one of my favorites,” said Carole Buhr, ECISD’s Campus Curriculum Facilitator. “It was a lesson. The kids learned something today and we, in turn, learned from them and what they thought about the space.”

Students were given a few test questions to get them warmed up for the voting process, such as “Who likes pizza?” and “Who likes broccoli?” – the responses were almost entirely smileys and frowns, respectively. After each question was asked, students showed their opinions using the voting signs, and a photo was taken of each response so that every vote could be counted.

The questions posed to the students covered the inside and outside of the school, asked if they had fun and learned a lot, and asked if they were excited to come to school every day – 78 percent were. The students’ final vote involved choosing their two favorite places in the school. Each student was given two stickers and instructed to put them on whichever two large photos of different areas of the school represented their favorites. The result was a landslide, with the playground and gymnasium taking first place. Overall, the students’ voting gave their new schools an A+.

“It was great to see all those smiley faces,” Parkhill Principal and Architect Dan Hart said. “It’s just so nice to see their excitement about the building and be able to hear their own comments and what’s on their mind when it comes to how much they enjoy being here is really gratifying.”

Parents and guardians, teachers, and administration, and staff all received surveys asking specific questions related to their use of the school, in addition to the student survey that was conducted. The surveys looked in-depth at all of the features, amenities, and design choices that went into the buildings. PSC also teamed with David Finley, chief operations officer of ECISD, and let the district pose their own questions as well.

Thus far, the response from all groups has been incredibly positive. The schools had to cope with 100 to 150 more students per school than what was planned for. However, the flexible and innovative layout design by Parkhill helped them organize and schedule for the unexpected influx. The schools were designed to be 21st Century schools and include spaces for project-based learning. The basic strategy of this kind of design encourages active learning, independent student work and engagement in hands-on experiences.

“It’s been a constant change over the course of the school year but a great one,” Buice Principal Alicia Press said. “I think it took the students about a day to adjust but parents, teachers, and staff have been constantly adjusting to all of it. But now everyone is fully immersed in it. Several of them have said how they would not want to teach anywhere else or in any other way which is great and a really neat transformation to watch.”

The results of the survey were published October 2016. 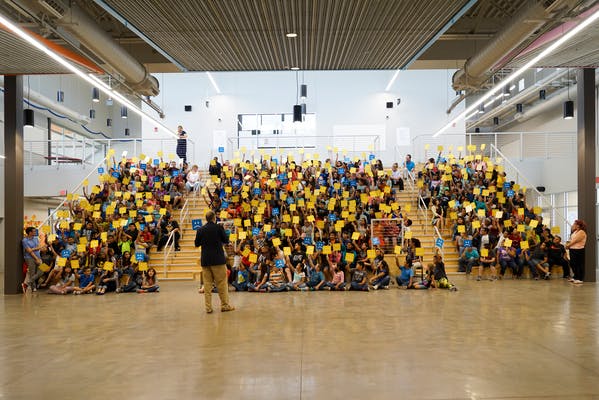