Parkhill recently completed several pieces of a bond package for Jal Public Schools in Jal, New Mexico. One of these parts included renovations to the existing high school and middle school. This included classrooms, offices, hallways, computer and science labs, as well as a commons area that helps separate the middle school and high school students.

It was this commons area that became an interesting focal point and feature during the renovation and design for Parkhill interior designer, Jana Forbes.

“When we go in to look at how to do a space it has to have some kind of functionality,” she said. “Not just be some random choice of why we want to do it. And with this area it was the existing cafeteria-type area that old and worn down. So, it was old and did not have a strong feature that we could really gravitate the room to.

“In the middle of the room was this very plain, boring support column that was remaining from the existing structure. But what is a strong support for the building structure is actually a weak point for the space because it’s just so dull. So, we wanted to change that.” 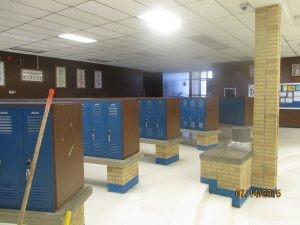 Parkhill’s design team started to think of ways to use the column as a central point in the design without altering it completely or getting rid of it. Then a light came on for Forbes – literally.

The design concept was a hit and the final product has proven to be even better. They wrapped the column with several LED rope lights that are controlled with a remote that the administration keeps. Then covered it with an acrylic, 3form heat-formed material with a translucent finish in a circular column around the original brick support column. The space has become an easy way for students to meet in between or during periods and lunches with tables and chairs surrounding the lit-up column. And there are even charging stations for devices that are connected to the same power as the lights.

“Now we can give these kids something fun, something entertaining that helps take their mind away from the classroom for a bit,” Forbes said. “And at the same time, it serves as a type of power hub for the area. So now we have a strong, design and focal point while also providing some functionality.” 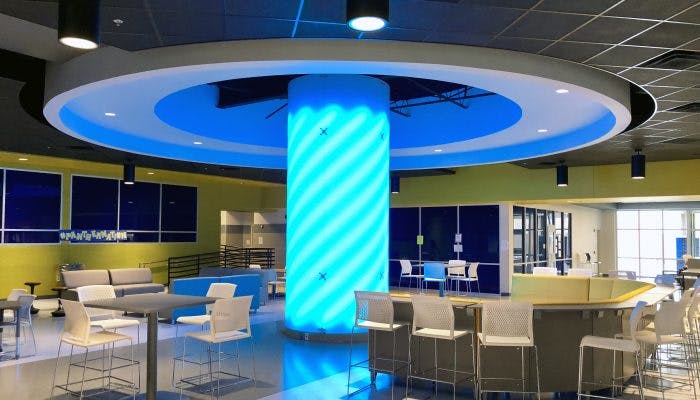