As Parkhill’s Metrics Leader in the Landscape Architecture and Planning Sector, he is passionate about the benefits of asset management, especially relating to schools. For example, instead of building 10 small campuses, school districts could maximize their dollars by building fewer larger ones. In one instance, it saved $23 million in the total cost of ownership over a 30-year span. That could equal 33 teacher salaries a year.

He spoke at the International Conference of the Association for Learning Environments (A4LE) in October in Anaheim, Calif. For that audience, Monte keyed on the phrase “carbon footprints,” which is a popular catchphrase there.

“With asset management,” he said, “we can pay more teachers to benefit more kids. We save energy, and we’ve reduced our carbon footprint.”

Monte testified at the state legislature last summer and again in the fall of 2018 with statewide estimates of Texas schools. He said the asset management strategy of space efficiency is trending to save taxpayers $30 billion.

One of his cohorts is Chris Nance, P.E., ENV SP, an associate and project engineer for the Water Resources Sector. Chris has developed new and updated existing geographical information systems (GIS) for existing utilities to provide large scale models of entire utility networks that help clients anticipate and budget for replacement infrastructure at the end of its design life.

Monte and Chris shared their thoughts on five ways you’re missing out if you don’t practice asset management:

1) You miss out on freeing up funds for hiring more teachers. 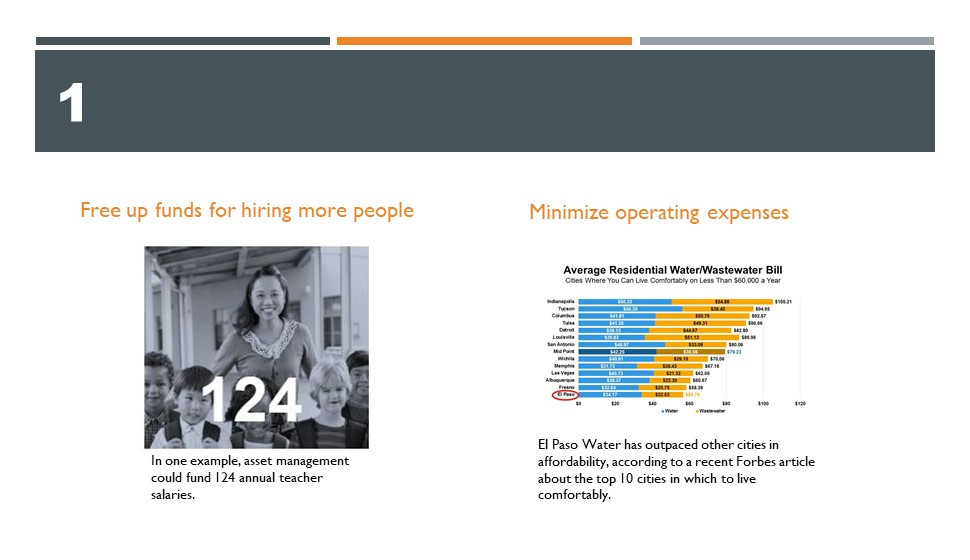 “Working with some colleges, I said, ‘Instead of building 10 small campuses, build eight bigger ones, and you can save $23 million in total cost of ownership in the next 20 years, ” Monte said. ‘But districts may say, ‘How does that affect me?’ You take the savings and put it in equivalents. In other words, that’s the equivalent of 124 teacher salaries a year.”

Using a risk-based approach, Parkhill can operate at the lowest overall cost of ownership, minimizing operating expenses, which should be a fiduciary responsibility to ratepayers.

“A car is a good example,” Chris said. “You know that if you drive it into the ground, you’re not necessarily saving money. You know that eventually, that car is costing more than buying a new one. We’re trying to find the most efficient path from a cost standpoint.”

2) You miss the opportunity to save energy through better insulation, better glass, mechanical units, and updated equipment but also less square footage. 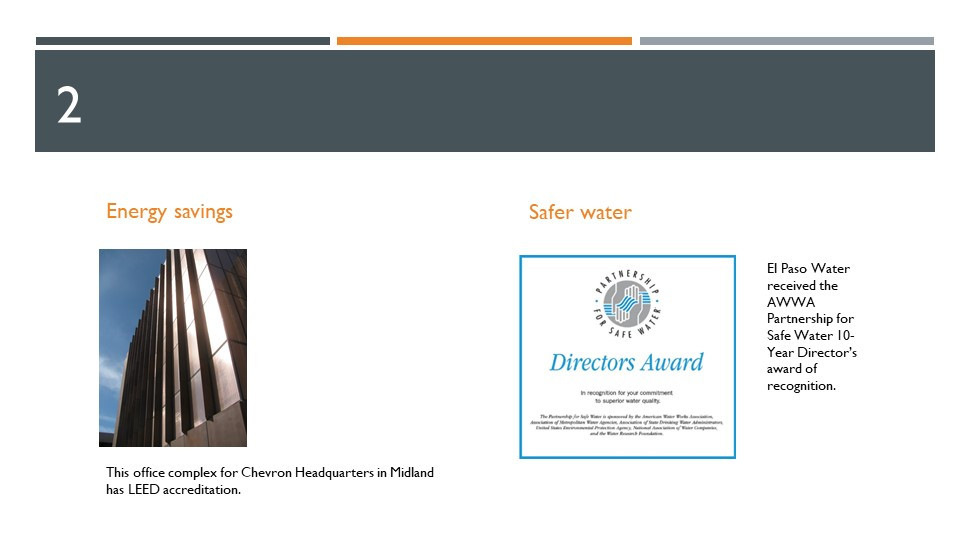 “What most people focus on is just making your building more energy-efficient,” Monte said. “However, another way of looking at it is in less square footage. Lubbock ISD took four small schools and replaced them with two larger ones, and the total square footage in the new ones is also fewer square feet than the four small ones, so they saved energy in two ways. They have more efficient buildings and less building space as well.”

On the infrastructure side, water can also be conserved. Taking care of leaky infrastructure prevents water loss and damage. El Paso Water is one example of a client that has outpaced other cities in efficiency and conservation, innovation and stewardship.

3) You miss the opportunity to shine. You’re a star when you find ways to make your company or district efficient and manage it more wisely. 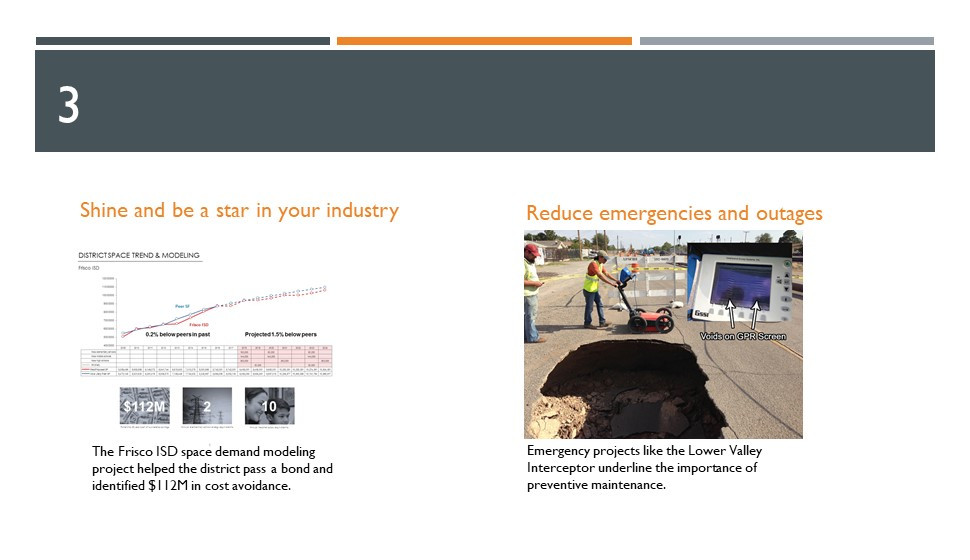 4) There is a correlation with higher student achievement. 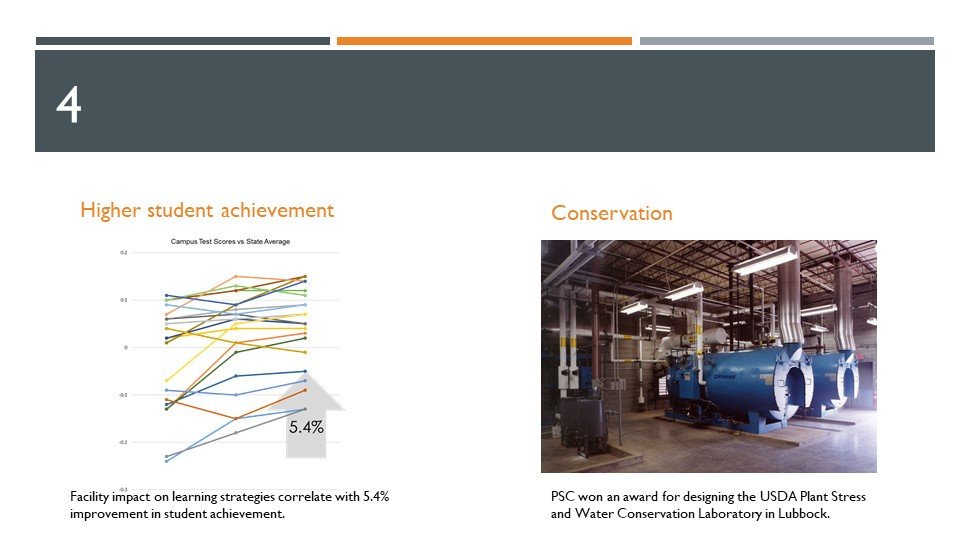 Under the leadership of Monte, Parkhill helped Austin ISD plan for its future facility needs with peer benchmarking, building space demand modeling and renewal optimization. This study utilized predictive analytics to model space demand and facility renewal options. Another part of the study included comparing these results with those of state and national urban peers. Often this perspective is useful to communicate optimal solutions and justify capital investment from a bond election. The resulting models identified $451 million in potential facility value improvements.

As for infrastructure, safer water is provided for a city. Better maintenance leads to better safety because poor performing assets (from deterioration or from higher performance expectations) are identified and replaced.

5) You have generational commitment. You can save your children and grandchildren financial burden. 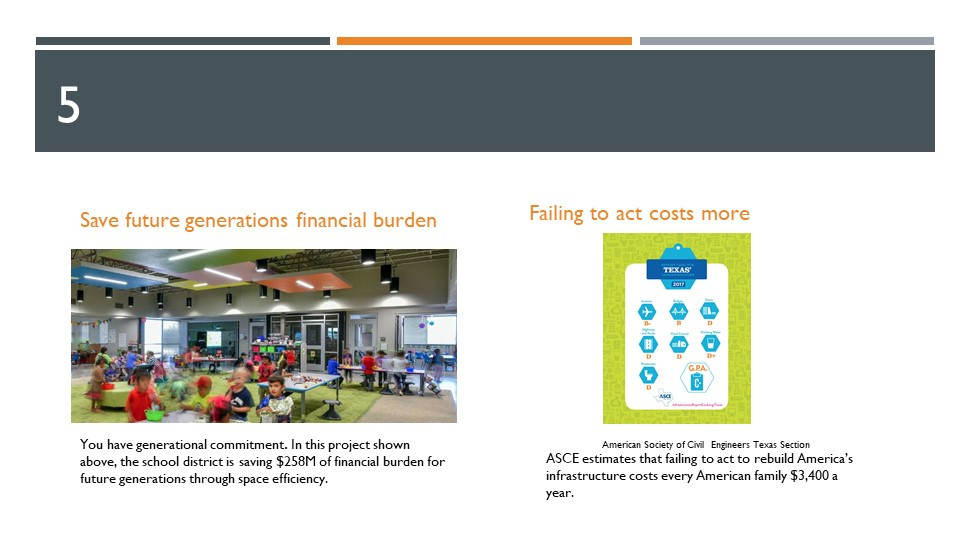 “People often think about long term impact in terms of 15 or 20 years on bond interest,” Monte said, “but once you’ve built that building, you touch at least two generations. You’ve got to maintain it, you’ve got to have insurance, and someday you may need to remodel it. It affects the next generation, too.”

“Asset management is very exciting. Hopefully, others will look at efficient clients and say, ‘Maybe I need to start doing this.’” 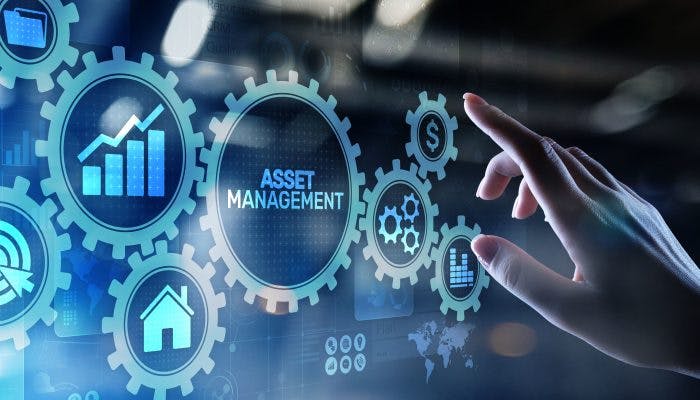 Monte Hunter has been the principal-in-charge for 21 school district bond programs and has provided facility modeling for more than 40 Texas school districts. His metrics for measuring facility impact on learning received the Council of Educational Facility Planners International (CEFPI) Impact on Learning Award in 2006. His optimization strategies have identified billions in cost of ownership avoidance for Texas school districts.

Monte’s metrics and analytics have been published in multiple education facility publications. He is a frequent speaker at education conferences. He has provided school facility expert testimony to the Texas Legislature and the United States Department of Justice.

As an associate and project Engineer for Parkhill’s Water Resources Sector, Chris Nance has experience in asset management, utility master planning, and capital improvement programming. He has developed expertise in GIS and hydraulic modeling for water distribution and wastewater collection systems.