“I’ve had the pleasure of visiting Parkhill schools from around Texas, and really was impressed with the innovation and modernization of the schools, so it was important that we have those 21st-Century Learning environments,” said Juan Cabrera, then-superintendent of El Paso ISD. “They’ve been a big help with casting that vision and capturing that vision as well at Coronado High School. Every one of our classrooms needs to allow for active, engaging, collaborative learning, and that’s another way of saying no rows and desks.”

Cabrera also said that although new additions such as the Fine Arts Center have enhanced El Paso’s Coronado High School through the years, the classroom buildings were almost six decades old. The design of the additions will provide more opportunities for learning and extracurriculars.

Coronado HS DemoGroundbreakingVideo from Parkhill on Vimeo. “What I’m most excited about is the modernization,” he added. “Parkhill had that experience. I knew they would be very open-minded to the types of schools we were looking for, and working with them, that proved to be true. The access, availability, and quality of the new gymnasium and sports fields included adding lighting. We’re very excited about the type of school that we’re going to build together.”

Marc Escareno, principal of Coronado HS, described the improvements as a historic investment. The school was founded in 1962, and a goal of this project is to give Coronado HS a facility that will improve the education and overall high school experience of students for years to come.

“It is well overdue. It’s going to be fantastic,” Escareno said. “Parkhill did a wonderful job with the design. I really like that 21st-century school concept that will naturally lend itself to best practices.”

New buildings will include a three-story administration and 21st-Century Learning classroom building, and a two-story field house.

“I think the district, the students, and the Coronado community are going to be really proud of that courtyard when it’s completed,” De Santiago said.

Another unique part of the campus design was the two-story field house.

“This field house solved two things. It created the first floor as mainly the program for football and offers direct access into the field. But on the second floor is access to the other fields – softball, baseball, and soccer – so we were able to have a compact footprint of the field house and really take advantage of the grade differential that exists throughout the campus.”

Parkhill designed a modern exterior to complement the style of 21st-Century Learning with elegance in a simple form and delineation of materials. Parkhill’s objective was to create a powerful example of contemporary architecture and to make a statement of advancement. A distinctive building angle will mark the front façade, drawing the campus population to the three-story entrance, and presenting a true sense of identity for the Thunderbirds.

Having 21st-Century Learning environments will allow the school to join with other El Paso schools in this learning style, said Luis Guevara, AIA, who was one of the main project architects.

Parkhill's goals include keeping the project within budget with escalating prices and learning more about the unique operational needs of the school. 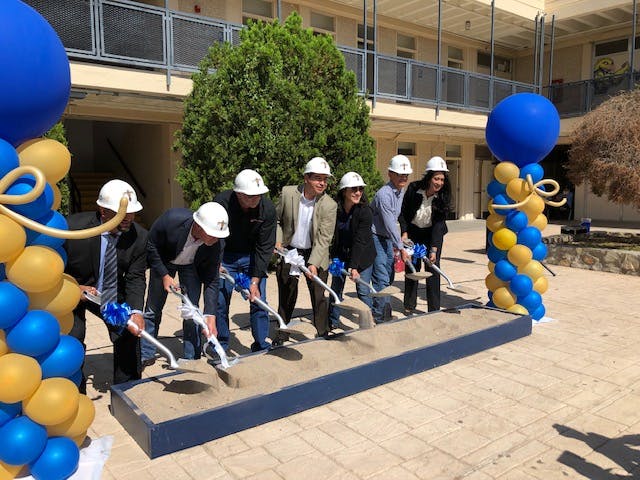 Parkhill is employing many of its disciplines, including landscaping, to create the courtyard shown in this rendering.