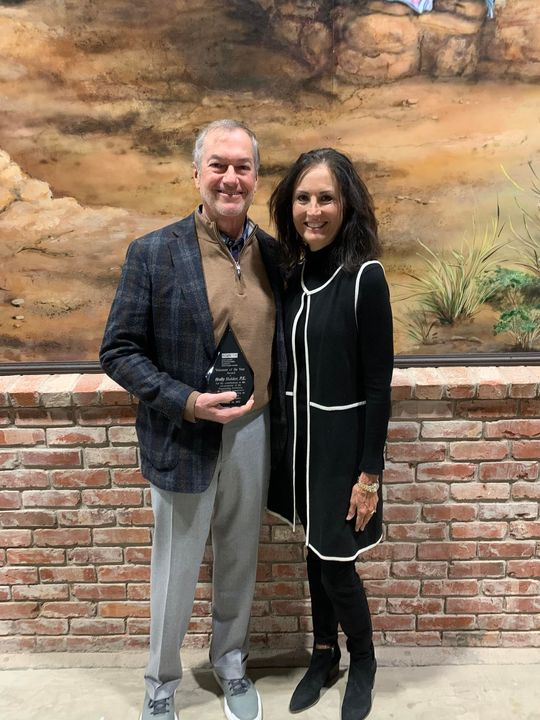 Parkhill is pleased to share that Holly Holder, PE, is the TSPE South Plains Chapter 2022 Visioneer of the Year. Holly is a Principal and Senior Practice Leader in Parkhill's Environmental Practice. He also served as the original Director of Environmental for the firm and was instrumental in Parkhill's acquisition of Gordon Environmental, Inc. in 2016.

The Visioneer of the Year Award recognizes an engineer who has contributed to the advancement of the engineering profession by supporting a vision of the future of engineering, serving as a mentor to tomorrow’s engineers, and positively impacting an environment for engineers to thrive.

"Holly continues to advance the profession, making a difference in the industry, mentoring others in the Environmental Practice, and improving the engineering profession," said Parkhill's Director of Environmental Practice Frank Pugsley, PE. "His long list of clients who know him on a first-name basis built his trusted advisor reputation, including the cities of Lubbock, Midland, Amarillo, El Paso, and Plainview, to name a few."

Holly's engineering experience with solid waste facilities as small as 20 tons per day to as large as 1,250 tons per day has helped him develop a thorough knowledge of solid waste operations and regulations and design award-winning projects. His varied experience with disposal landfill cell development includes geomembrane lining projects, groundwater monitoring and analysis, landfill gas control systems, and daily engineering aspects, all under the philosophy of being a steward to the environment.

Holly is involved on the Board of Directors of Solid Waste Association of North America’s Texas Chapter and was re-appointed to the Texas Commission on Environmental Quality’s Municipal Solid Waste and Resource Recovery Advisory Council in 2019 where he serves as Council President. He is a past president of the Caprock Branch of the American Society of Civil Engineers and was named Engineer of the Year by the South Plains Chapter of Texas Society of Professional Engineers in 2011.