Blog Architecture Your Building as a Teaching Tool

Your Building as a Teaching Tool

No longer is the goal of education to dispense facts for students to chew on quietly. Our philosophy has evolved into one of inquisition over consumption, where the challenge is not “what” but “why.” Students engage in analysis, action, and critical thinking to focus on how they can use the information. One of the great tools to communicate this pedagogical transformation is the school building itself.

As a member of Parkhill’s K-12 design team, RJ Lopez, AIA, partners with communities to deliver high-performing learning environments that are inventive, relevant and comprehensive. At Parkhill University in 2019, RJ shared a presentation titled, “Your Building as a Teaching Tool” that explained how the K-12 team delivers innovative solutions to meet the critical need for adaptable 21st-Century Education in our communities.

“If we are doing the job right,” RJ said, “the building should speak intention.”

Determining what is vital to student success begins with having a candid conversation about what the client’s end goals are, not just for the particular project, but for the generations, minds and revolutions to come.

“Many times, we focus on completing the basic task at hand,” RJ said. “We often overlook the real goal, which is to facilitate learning.

“By tapping into the local culture, the district’s mission and the school’s mission as a palate, designers can position the building to more directly facilitate questions about the learner’s potential. It becomes a personalized design that facilitates personalized learning.”

One project RJ highlighted to explain this was Jal Public Schools in New Mexico. Parkhill was engaged in providing a mechanical screen wall, but conversations with the district soon uncovered a key thread in the fabric of their story. They expounded on their carpentry and welding programs, even sharing their excitement by recently hosting a rocket competition. Parkhill’s team also uncovered the district’s goal to help students understand human achievement in the natural sciences, the social sciences, the humanities, and the arts. 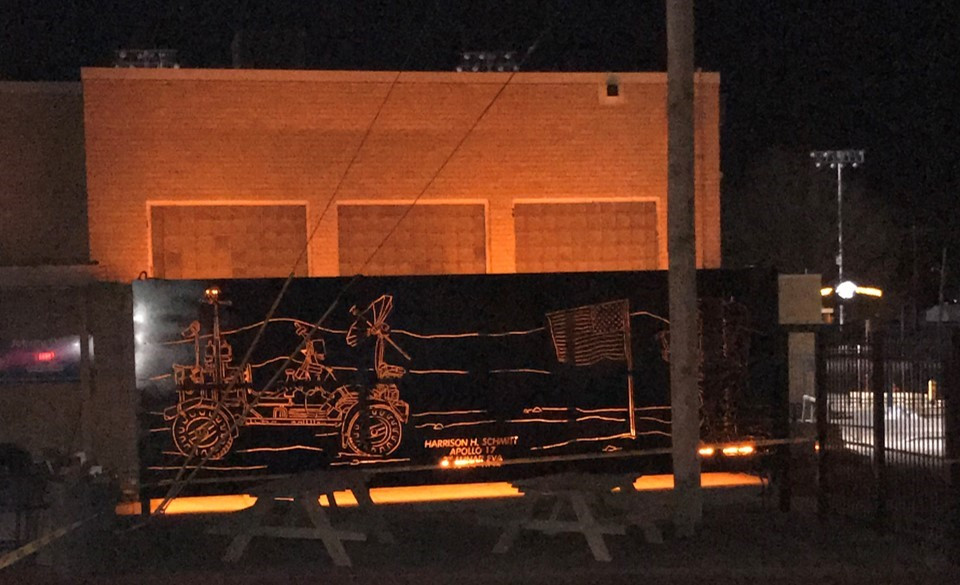 “Instead of simply installing shiny new louvers on this 50-year-old building,” RJ said, “we decided to make the wall a teaching tool, including artwork depicting Harrison Schmitt, a native New Mexican who grew up in a small city similar to Jal.”

Schmitt, who was an American geologist, NASA astronaut, university professor, and a New Mexico Senator, among other accolades, was the twelfth person to step foot on the moon with the Apollo 17 mission.

“The enclosure is now a teaching tool that depicts the accomplishments of a New Mexican who came from a similar background,” RJ said. “He was able to accomplish more than most would in two lifetimes, highlighting the students’ potential. Which moon will you be walking on, and how does the content you are learning now help get you closer to your goal?”

“As Americans designing a high school in Italy, our first instinct was to use the rich history of notable Italian figures as a teaching tool in the school,” said RJ. “At the end of the first presentation of notable historical Italians, we were asked by an Italian, ‘Isn’t this a school for Americans? What about connecting the dots and including notable Americans that were influenced by notable Italians?’ This started the ball rolling on how we could best connect the project scope with the local culture. 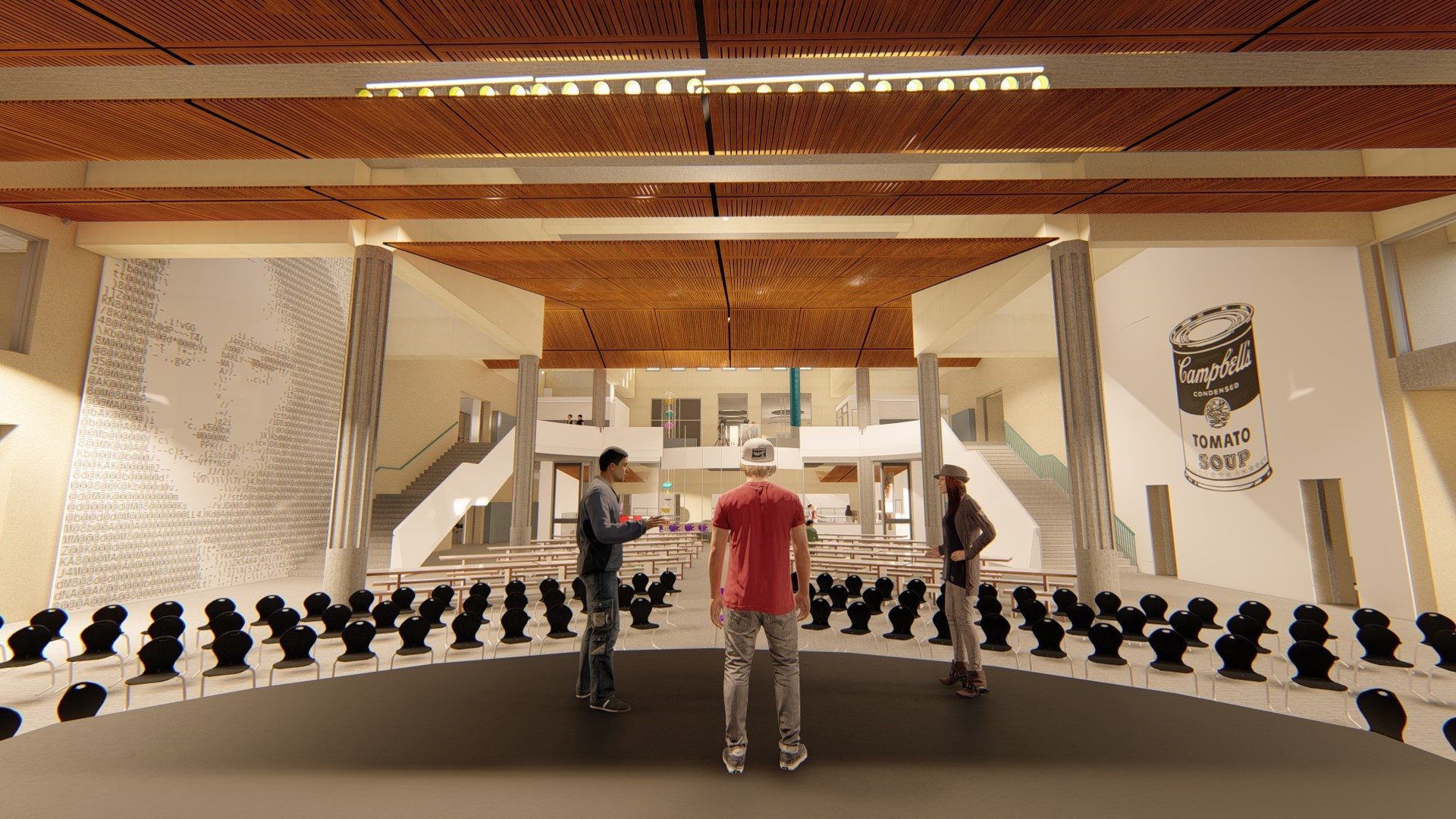 “Our next presentation showed two opposing murals, Leanardo’s Mona Lisa and Andy Warhol’s Campbell’s Soup. The thought was that Leonardo was considered a rebel artist of his time in Italy, and eventually, the Mona Lisa inspired Andy Warhol to question art in a similar fashion to Leonardo Da Vinci’s,” said RJ. “The challenge to the users of the building is, ‘How will you challenge art?’”

The team also found a connection between Andy Warhol and another Italian legend, Botticelli, whose famous Venus directly inspired Warhol to critically re-imagine the painting. With such a clear connection, the team brought the suggestion to the school, where one teacher commented, “Part of Botticelli’s technique was to accentuate Venus’s features to an unobtainable level of beauty. Also, she is a white, blonde-haired god. If I walked into this school as a non-white, non-blond-haired girl, I might think that I am not beautiful because I am not that. As a white, blonde woman myself, I might think all you see me as is an object of beauty and not someone to take seriously when it comes to academic endeavors.”

If “all art is quite useless,” according to Oscar Wilde, some could say art has the potential to be what they see in it, a mirror to reflect our thoughts about the world. It is also an opportunity to change that narrative, which is why designers must take responsibility for understanding how everything from the art on the walls to the walls themselves has the power to affect user experience from diverse circumstances, a challenge we can only overcome by relying on one another.

“Sadly, what that teacher said was shocking to us at the time but completely warranted,” RJ responded. “We eventually landed on murals that were more abstract by both an Italian and American artist. However, this premise that our teaching tools should speak to all backgrounds, regardless of gender, sex or interest, spurred conversations about inclusion and how embracing diversity is one of the greatest attributes of being American. 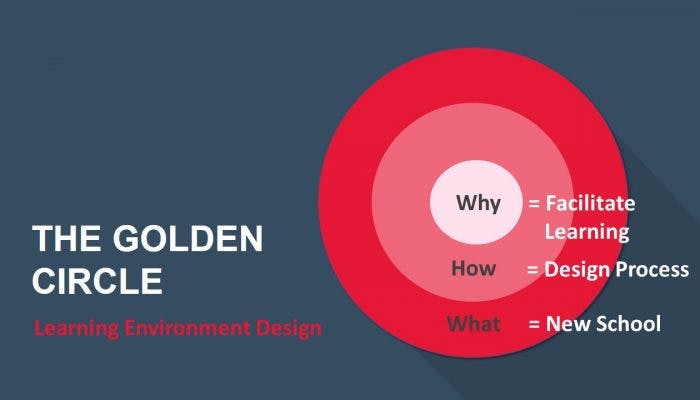