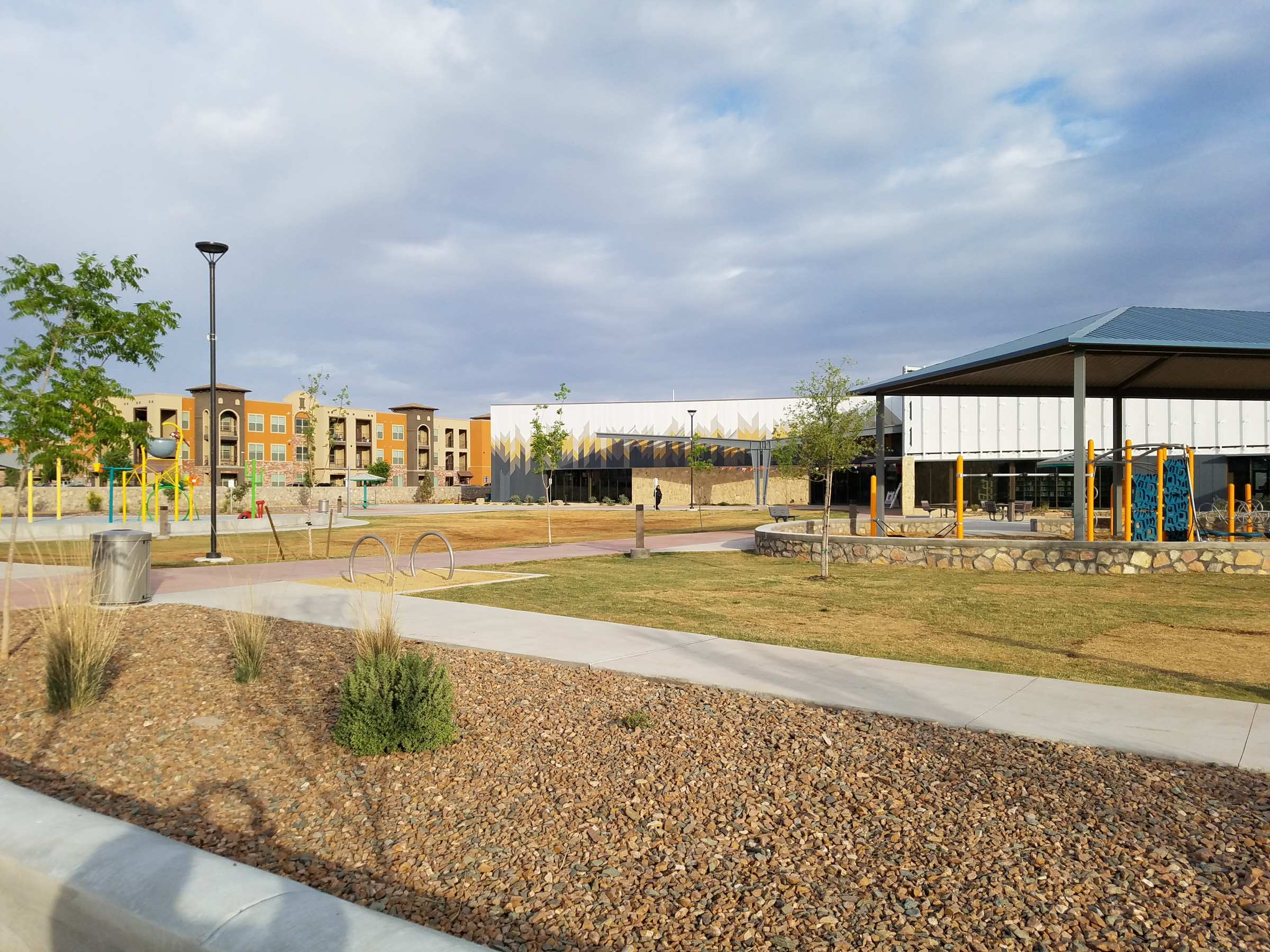 As a part of the 2012 Quality of Life Bond passed by the City of El Paso, this existing warehouse building and parking lot were envisioned for use as both a community recreation center and city park to rejuvenate the Chamizal neighborhood. Parkhill designed the park portion of the site and collaborated with the firm that designed the recreation center to create a seamless transition between the two projects.

Given the existing site’s previous use as a VF Jeanswear factory that made Levi Strauss and Wrangler jeans and its vicinity to the Chamizal National Memorial, the city envisioned a project that paid tribute to the site’s history as well as the future of the community. This was accomplished through creative responses in the site, including a Levi Strauss-themed splash pad with 11 interactive spray features, walking paths colored and scored to evoke the emblematic Rio Grande, custom plaques, and region-specific materials. As a tribute to the former jeans factory, the painted “stitches” in the splash park represent the iconic V shape inherent in Levi jeans.

Other amenities provided include a playground and shade canopy, picnic tables with shade canopies, basketball and futsal courts that utilize the existing warehouse structure and slab, parking, fire access lane, and on-site stormwater retention integrated into the lawn and landscape.

City Representative for District 8, Cissy Lizarraga, said this is the second City of El Paso spray park in District 8 and the first recreation center to include a library component. The Chamizal recreational facility has a notable history with District 8, she said. For over 20 years, the VF Jeanswear Factory made Lee and Wrangler Jeans a staple in this community. 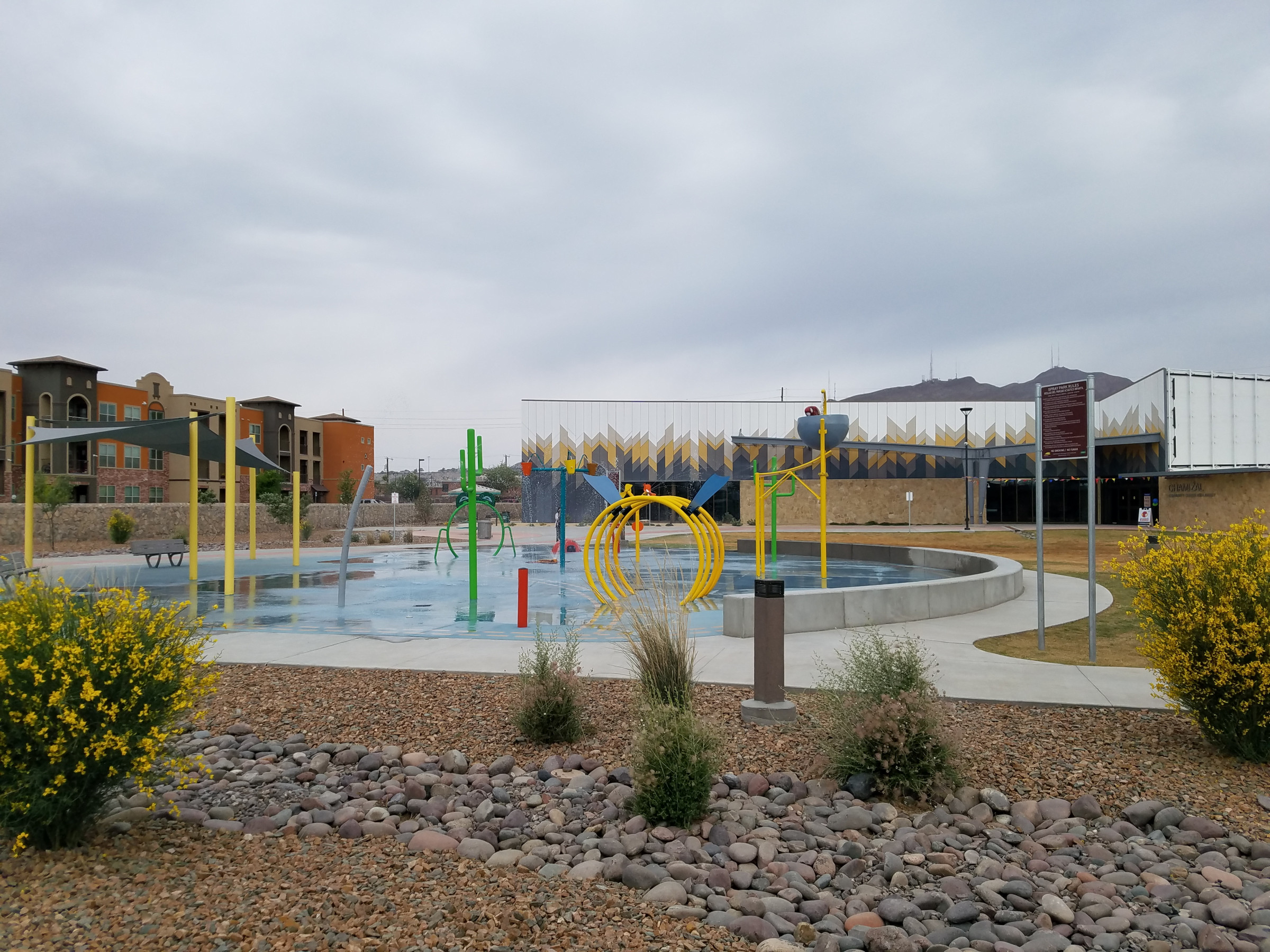 “The opening of this facility increases the quality of life of this community and with it the benefits of having a recreation center, library, and park,” Lizarraga said. “Children living close to a recreation center and park are physically more active, there is a positive impact on juvenile crime, it increases family ties, and recreational centers provide quality leisure time for families, increasing their family bond. Recreation and library programs increase the likelihood of student achievement.”

Mike Ramirez, Director of CPS-CM-Survey at Parkhill, said this project will contribute to the revitalization of the area.

“The overarching story is reinvesting into El Paso,” he said. “This was our piece of the puzzle in ‘Building Community’ by revitalizing neighborhoods.”

Mayor Oscar Leeser gave credit in the ceremonies to the former jeans factory. “There was a lot of pride and lot of sweat that went into the factory” where many in the Chamizal neighborhood found employment.

The state-of-the-art center grew out of a petition from Familias Unidas del Chamizal to invest in the community as a tribute to the Hispanic women who worked at the site.

“This is state-of-the-art,” said Ben Fyffe, Director of Cultural Affairs and Recreation, “and I’m incredibly excited that this is the first of several facilities that will be engaged with our partners from the library to engage and enrich a whole person and a whole community.” 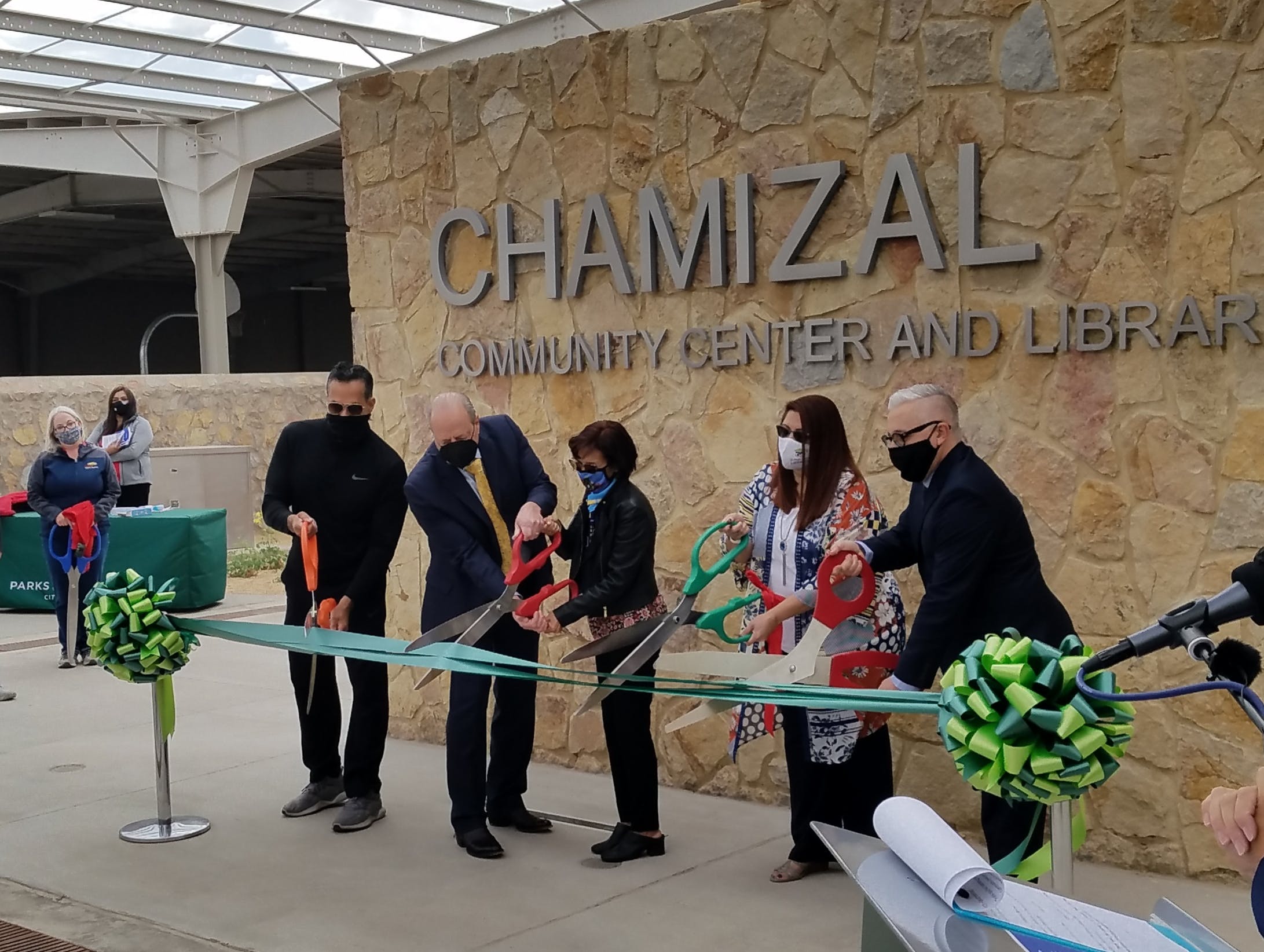