Engineer of the Year

The Engineer of the Year Award recognizes Edwards for his achievements in and contributions to the engineering profession and highlights service to the community.

Edwards is a Parkhill Principal, has been on the firm’s Board of Directors since 2019, and is the Director of Water Resources. His experience includes more than 25 years of working with cities throughout the Texas Panhandle, solving many communities’ water and wastewater infrastructure needs. He has also been involved in some of the region’s largest water supply projects, including all phases of the Canadian River Municipal Water Authority Wellfield Project, the Lake Alan Henry Water Supply Project, and Midland’s T-Bar Wellfield Project. Throughout his career, Edwards has been involved with the local chapter of the American Society of Civil Engineers and the Texas Society of Professional Engineers.

“Zane and I came to Parkhill at about the same time,” said John Hamilton, Executive Vice President of Engineering. “In addition to being co-workers and business partners, we developed a long-lasting friendship that has stood the test of time. Zane understands the value of relationships in business and is trusted by clients across the region we serve with their most challenging, complex projects. What a great honor to a worthy candidate who earned this title.”

Visioneer of the Year

As Visioneer of the Year, Kelley has advanced the engineering profession through his vision for the future of engineering, educating younger engineers, and fostering an environment in which engineers thrive.

Kelley joined Parkhill in 1978 as a Design Engineer with a background in agricultural and environmental engineering. He is known as an outstanding engineer and was a trusted advisor for many of Parkhill’s clients before retiring in 2012. In particular, Kelley served as Project Manager and Team Leader for the Canadian River Municipal Water Authority’s Alternate Water Supply Project, which currently provides supplemental groundwater to Lubbock and the other member cities of CRMWA. He also envisioned Lake Alan Henry as a water supply for the City of Lubbock.

“Throughout his career, John modeled deep commitment to his faith and family, and he showed his employees the importance of work-life balance,” Edwards said. “John modeled how to walk through the valleys of life while maintaining a positive attitude and tenacity to continue the journey.”

Young Engineer of the Year

The Young Engineer of the Year Award recognizes a young TSPE member who has made notable contributions to the engineering profession and the community in the early years of his or her career.

Krueger has served on many Water Resources projects including the project manager for the Crane County Wellfield Project.

“I never have to worry about anything as long as Kyle is involved in this job,” said Dru Gravens, City Manager of Crane.

Krueger was named the General Manager of the Midland County Freshwater Supply District (MCFWSD). The MSFWSD is responsible for operating the T-Bar Wellfield and the Clearwater Ranch Wellfield for the City of Midland.

“Kyle, because of his knowledge and leadership, is a strong asset to the District,” said Jose Cuevas, President of the MCFWSD. 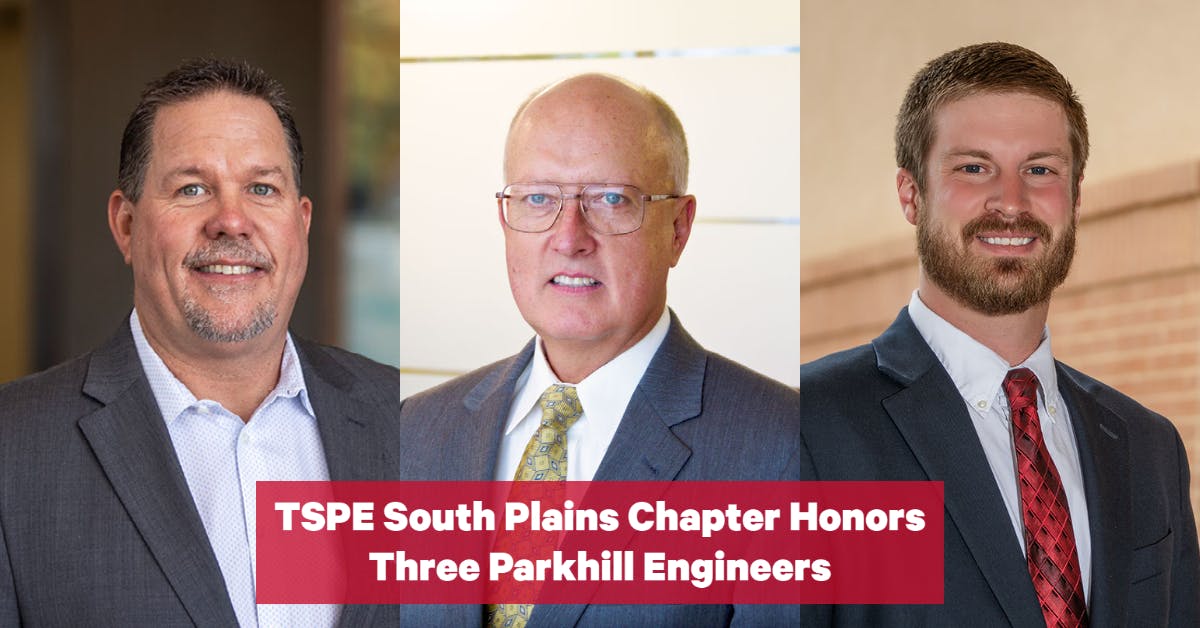