University of Parkhill 2019 - Are You Really Going to Throw That Away?

Although Todd Stiggins, PE, traded his focus from agricultural engineering to solid waste engineering, he still has a passion to improve the world and environment around him. But now, it’s through environmentally responsible landfills. 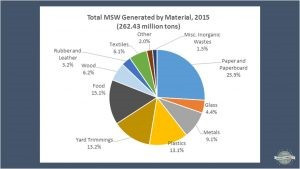 He presented “Are You Really Going to Throw that Away?” at University of Parkhill 2019. He shared that 262 million tons of trash were generated in the United States in 2015. Between 1960 and 2015, America almost tripled its tonnage of waste. For Texas, the average person generates 2,500 pounds of trash per year; his own family of four is estimated to contribute 5 tons each year to the landfill.

For many years, trash went to the dump. These sites were generally not designed to consider the surrounding environment, such as protecting wildlife or people from scavenging and more importantly protecting groundwater resources from contamination.

“Unlike a dump, a landfill is an engineered solution for waste disposal – our top priority is to hold paramount the health, safety, and welfare of the public and the environment,” Todd said. 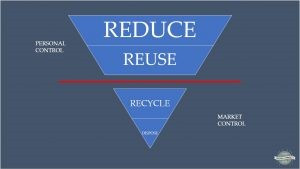 But, do we have better options than the landfill? In the 1970s, industry experts changed the paradigm to consider garbage as a resource for recovery instead of waste that is only destined for disposal. As shown in the image to the right, Todd emphasized a hierarchy of actions available for handling our waste. In order, those activities are Reduce > Reuse > Recycle before arriving at Dispose. With the upper two – Reduce and Reuse – we maintain personal control of what happens. After moving to the lower two – Recycle and Dispose – we forfeit control to the market. Why?

Recycling has its challenges. Texans recycle 22 percent of their materials, far behind the national average of 34 percent. Because Texans have so much space for landfills, the cost to throw trash in the landfill is approximately $35 a ton. In comparison, a 2017 study by TCEQ found that it costs $60 to $90 per ton to recycle glass, metal, or plastics in Texas, and those numbers are even before transportation costs are factored in. Other challenges of recycling include local regulations, problems with sorting, identifying a market for items, and transporting the raw materials to a facility that can repurpose them into finished goods.

Sorting is a major concern. Proper sorting requires either labor-intensive human resources or expensive automated Material Recovery Facilities (MRFs) to the tune of $20M each. Contamination – something as simple as a plastic grocery sack – can gum up the automated recycling stream.

China has historically been a place to send recyclables. For the last decade, China has imported 50 percent of the world’s recyclable materials. In the past two years, China passed more stringent rules to drop that percentage to 10 percent. China also banned 24 products that it will no longer accept and now says that contaminated recyclables will be limited to a mere half a percent. As a result, America is going to need to adapt and in particular improve the nation’s sorting capabilities, Todd said. 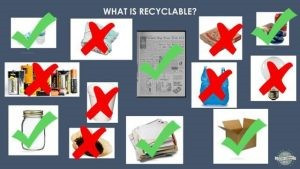 Education is vital. Find out what can really be recycled and what is actually “wishcycling.” Wishcycling is putting non-recyclable items with the hope, and personal warm fuzzies, that those items will be recycled. Plastic bottles, newspapers, empty cans, glass bottles with metal tops, paper, and boxes are recyclable. Diapers, pizza boxes, batteries, foam cups, plastic bags, lightbulbs, and food are generally not recyclable.

TCEQ, Take Care of Texas, State of Texas Alliance for Recycling (STAR) and Earth Day programs are good sources of information. For example: 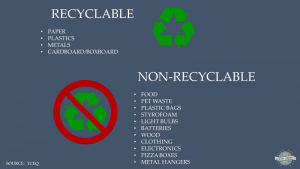 “In America, we’re getting over the guilt that landfills are a bad thing. We can safely store waste while protecting our environmental resources.”

Todd explored the future of solid waste management, explaining that when recycling technology improves in the future, the waste stored in landfills can be mined and put to beneficial use. We are actually already re-purposing the by-products of landfills. Methane gas is currently captured and used in a variety of ways including electricity generation. In another instance, methane can be piped to a firefighter training facility. America’s propensity for innovation and advancement holds promise for even better solutions in the future.

“We are living in a new age, where we are learning to do things in a different way for resource management,” Todd said.

However, the takeaway is that at the present time, the best choice to decrease what we send to the landfill is to maintain our personal control over the activities and Reduce or Reuse. 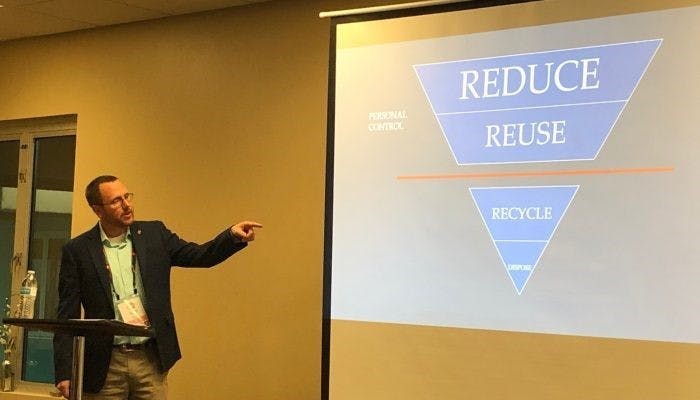